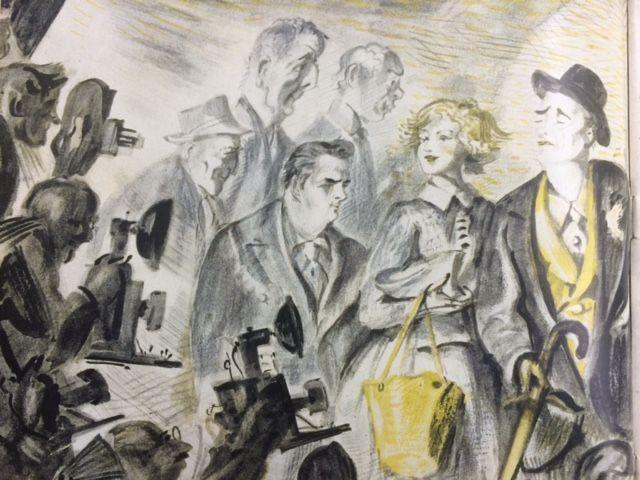 Toward the end of the Mickey Jelke trial, Life magazine carried a two-page story about the matter entitled “The Great Vice Trial” with a subtitle of “Sinful doings, café society, rights of the press get mixed up in a New York courthouse farce.” It called the spectacle outside the courtroom “one of the most unjudicial circuses ever witnessed.” On the page after the Jelke trial story, there appeared an editorial entitled “Indochina: the Oldest War.” According to the editorial, France’s “shooting war in Indochina,” the term used to describe France’s colonial possessions of Vietnam, Laos and Cambodia, “recently entered its seventh year,” but the conflict was no longer “either a colonial war or a minor war.” France was caught in a quagmire. The war had divided the French people and weakened France’s international position. French soldiers were dying, and efforts at building the former colony into a nation were struggling, as were the attempts to train the Vietnamese army to take over the struggle against the rebels. The editorial mentioned that the United States had already spent “$1.5 billion in direct aid so far.” Nevertheless, the editorial said, “Indochina is not a land Americans know.”

Gradually over the next year, Americans would read more and more about Indochina as the Communist Rebels moved toward victory. In November 1953, Vice-President Nixon made a fact-finding tour of Asia and the Middle East arguing that America would fight “communist colonialism.” On December 23 of the same year, Nixon gave a half-hour radio and television report to the nation on the global situation. He thought that the Communists were on the defensive, but the struggle was only beginning, particularly in places like Indochina. In the following months, Nixon continued his public warnings about the importance of not letting Indochina fall into Communist hands. As Vietminh forces neared victory in early 1954, Nixon again took center stage, making off-the-record comments at the American Society of Newspaper Editors’ convention about United States plans to send ground troops to Vietnam to protect its interests and prevent the spread of Communism. The speech soon leaked, and the public was again faced with another Asian war. But the United States did not intervene when the French Forces in Vietnam were defeated at Dien Ben Phu a few weeks later. The defeat signaled the end of French involvement in that country. The French left, and, to prevent the communists from moving in, the United States stepped up its aid to the government of South Vietnam, which was little more than a puppet regime run by the C.I.A. 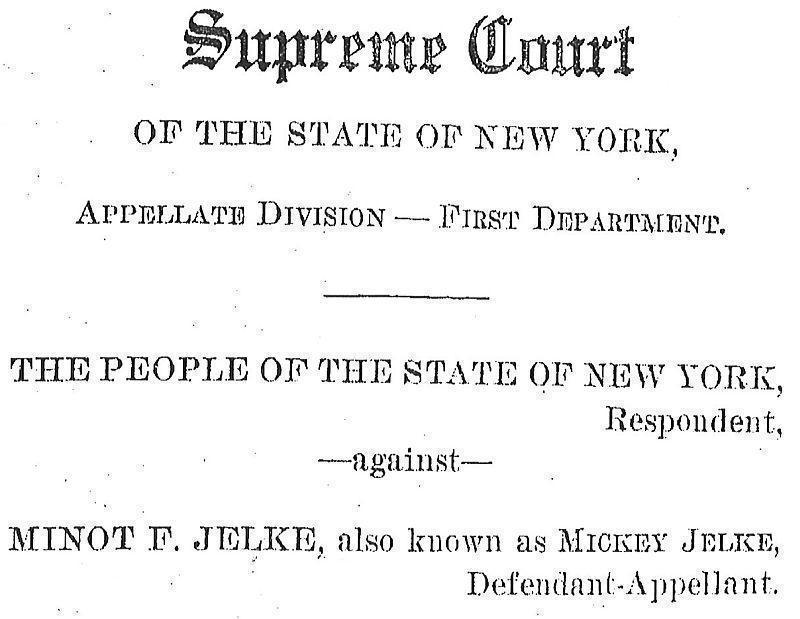 A month after Dien Ben Phu, the Supreme Court of New York (Appellate Division), in a 3 to 2 decision, overturned Mickey Jelke’s pandering conviction, concluding that public morality was not a sufficient concern to deny Mickey’s right to a public trial as guaranteed by the United States Constitution. The intermediate appellate court directed that Mickey be given another trial, this one open to the public and the press. The D.A.’s office took the case to the highest court in New York, the Court of Appeals. The case was briefed and argued by mid-October. By then, the Red Scare had largely abated. Congress was no longer holding hearings about Communist infiltrators in Hollywood or the government. Tailgunner Joe McCarthy, the Senator from butter-loving Wisconsin, had been repudiated and publicly rebuked, and the Senate was contemplating censuring McCarthy. At the same time, however, Communism aggression around the globe was not ignored. In November, President Eisenhower asked the Senate to approve a Southeast Asia collective security treaty that, among other things, provided for United States economic assistance in the event of any armed attack or indirect aggression against the Indo-Chinese states of Vietnam, Laos or Cambodia. The treaty was specifically designed to address the problem of internal Communist subversion in those states. If Communists threatened any of the states, either externally or internally, the United States would be ready to provide military aid.

On New Year’s Eve, the Clerk of the Court of Appeals of New York released the opinion in People of the State of New York v. Minot F. Jelke, also known as Mickey Jelke. The court did not reach the constitutional issue that guided the lower appellate court. Regardless, the result was the same. “Of uncertain origin, but nevertheless firmly rooted in the common law,” the majority wrote, “the right to a public trial has long been regarded as a fundamental privilege of the defendant in a criminal prosecution.” In New York, the right was embodied in various statutes, including one that guaranteed to a criminal defendant “a speedy and public trial.” Although a court had some leeway to exclude members of the public in order to preserve order and maintain proper decorum, a broad exclusionary order of the type issued by Judge Valente was improper because of the statutory protections. There was, according to the court, “possible benefits of attendance by the press,” whose “widespread report of what goes on in the courts may well provide a potent force in restraining ‘possible abuse of judicial power.’” Even though Judge Valente “was unquestionably actuated by the highest of motives,” excluding the press could not be justified based on the “sensational and vulgar coverage” that the proceedings had been receiving in some newspapers. “Deplore as we may the bad taste of reporting of that kind, the courts may not take unto themselves the power to enforce their notions of public decency and morality at the sacrifice of basic rights guaranteed to the defendant by statute.” By a vote of 4 to 2, the case was remanded so that Mickey could have his day—his public day—in court.

The same day, the Court of Appeals released its opinion on the challenge to Judge Valente’s exclusion order by various press associations and newspaper publishers. The court had delayed issuing its decision until after it had decided Mickey’s case. In another 4 to 2 decision, the court rejected the arguments that the press had a First Amendment right to attend the trial. “It is well, at the outset, to emphasize that this is not a case of free speech or freedom of the press and that the right asserted by the petitioners [the press associations and newspaper publishers] is not embraced within the constitutional provision guaranteeing those freedoms.” There was no constitutional right to have access to what transpired in the courts. Even though court proceedings were public events, a judge could exclude, under the proper circumstances, the general public, including members of the press, from judicial proceedings. Such an exclusionary order did not prohibit the press from freely publishing and distributing news and comments. Nor did the highest appellate court think that any New York statute conferred a right on the members of the public to hear what transpired inside a courtroom. The statutes on which Mickey had prevailed guaranteed a defendant a public trial, but those laws were clearly designed to benefit solely the defendant. In some instances, the defendant might not want a public trial, but the decision for a public or private trial was the defendant’s, not the general public’s. Because the public had no right to force a public trial, the press had no right to challenge Judge Valente’s ruling.

Even though the press had lost the issue of its right to force a public trial, it had been handed the opportunity to do at the second trial what it had been precluded from doing at the first: report the sordid details of the pandering charges. Because Mickey had the right to a public trial, the courtroom would be open. Through his attorneys, Mickey issued a statement: “Justice and a fair trial were denied me by a secret trial behind closed doors. When my case is presented anew to a jury in an open courtroom, I am satisfied that my innocence will be established.” Mickey’s statement then added: “The prostitutes and panderers who testified falsely against me will not dare to repeat those lies in the glare of a public trial.”

Within hours after the decision was announced, the D.A.’s office detained Pat Ward, Marguerite Cordova and Barbara Harmon as material witnesses. All points bulletins were issued for Erica Steel and Pat Thompson, both of whom were thought to be in southern California. A New York detective was dispatched to Hollywood to quiz top movie stars about their involvement with Mickey’s coterie of gals. As the D.A. geared up for the do-over, other pressing stories dominated the headlines. Harvey Matusow admitted that he gave false testimony before Congress in 1952 and 1953 when he fingered 245 others as being members of the Communist party. The United States had exploded another A-Bomb in the desert of Nevada, and the blast could be seen from as far away as Los Angeles. John Foster Dulles, the Secretary of State, had returned from a visit to U.S. allies in the Far East, promising that American military power and America’s will-to-fight would keep Southeast Asia free. To deter Communist military aggression, the United States needed to support the Philippines, Formosa, Burma and Indochina. Dulles urged a military buildup in those countries, backed by American sea and air power and by America’s willingness to use tactical nuclear weapons. Vice-President Nixon soon joined Dulles in warning the Chinese about America’s willingness to use atomic weapons if China became involved in war in any of the Asian hotspots. In Vietnam, a large offensive by the Viet Cong was underway, threatening South Vietnam President Ngo Dinh Diem’s government. But gradually, Mickey’s re-trial wedged itself into the headlines.