The main proponent of the repeal of the oppressive federal oleo laws was Congressman L. Mendel Rivers from South Carolina. In 1944, he introduced a bill to repeal the federal oleo tax. The bill died in the Agricultural Committee. Undeterred, Rivers introduced another bill the next year, and the year after. Each time, the bill died in the Agricultural Committee, which was controlled by Congressmen from dairy states. Mendel’s relentless support for the repeal soon earned him the nickname Oleo Rivers, and his bill became an annual ritual of sorts. In the spring of 1948, Rivers once again introduced a bill to repeal the tax, and the debate that ensued was fierce.

Oleo had become a geopolitical issue. Cotton was still king in the south, and cottonseed oil was one of the main ingredients in all-vegetable oleo. With no tax on colored oleo, sales of margarine would explode, Rivers and other Southern Democrats reasoned, thus increasing the demand for cottonseed oil. But the Southern Democrats’ justification for repealing the Oleomargarine Act of 1886, as amended, was not just economic. That act was viewed as yet another example of an oppressive and overly intrusive invasion by the federal government into State, if not private, matters. Mendel’s bill again died in Committee, which was controlled by Republicans from the mid-west. The oleo issue split along party lines, with old-line Republicans in the Committee opposing the reform and the Democrats in favor of the tax repeal.

Freshman Congressman Richard M. Nixon from California was one of the new Republicans who saw the overreaching arm of federal government in the oleomargarine legislation. “The House Agriculture Committee recently defeated legislation to repeal Federal taxes on colored oleomargarine,” Nixon wrote his constituents in March 1948, “thus effectively blocking efforts to bring the matter the House floor for a vote, at least for the present.” Nixon stated that he did not believe that the federal government had the right to discriminate against one type of food in favor of another. Nor did he believe in the government’s right to tax food. There was no middle ground on the issue. The tax was either right or wrong. He believed it was wrong. He didn’t want to take a position on oleomargarine versus butter. That was for the consumer—the housewife—to decide. He thought that oleo should be conspicuously labeled in the grocery store and on restaurant memos. He would let oleo and butter duke it out.

With Nixon’s support, Oleo Rivers quickly circulated a petition among his fellow Congressmen to discharge the Agricultural Committee and bring the vote on the tax repeal to the floor of the House. Rivers was a tall, thin man with flowing hair that was nearly all silver. He was a consummate politician. He cajoled, backslapped, pressured, and harassed his colleagues. A little more than two weeks later, he had gathered the necessary 218 names on the discharge petition. The House discharged the Agricultural Committee and brought the oleo tax bill to the floor, where moderate Republicans joined Southern Democrats to pass the bill by a 260 to 106 vote. The proposed legislation moved to the Senate, where it received early bipartisan support from Republican Robert Taft of Ohio and Democrat William Fulbright of Arkansas. The bill was sent to the Senate Finance Committee, which approved it by a unanimous vote. President Truman announced his support for the measure and promised to sign it into law. The Senate, however, was not able to vote on the proposed legislation before the summer recess, and the bill sat as the parties geared up for their presidential nominating conventions.

When the Democratic Party Convention in Philadelphia opened in July 1948, the party was in shambles. The Republicans controlled Congress, and the incumbent President, Harry S. Truman, faced an uphill battle for re-election. The party was on the verge of splintering as the Democratic platform was constructed. There was agreement on many of the planks. One of them condemned communism. Another announced support for Israel, a country barely two years old. Another announced the intention to maintain a strong military in order to protect the peace of the world. Oleo Rivers and other Democrats from the Old Confederacy advocated a plank on oleomargarine, and eventually one was added as the official statement of party intent: “We favor the repeal of the discriminatory taxes on the manufacture and sale of oleomargarine.” The oleo plank was controversial, as many of the Democrats from northern dairy states opposed oleo reform, but Southern Democrats prevailed: it was a matter of States’ Rights. Soon however, the party disintegrated over another issue involving, according to the Southerners, States’ Rights. The main body of the Democratic party adopted a plank that boasted the party’s role in the “great civil rights gains made in recent years in eliminating unfair and illegal discrimination based on race, creed or color” and reaffirmed the party’s committed intention to continue “its efforts to eradicate all racial, religious and economic discrimination.” 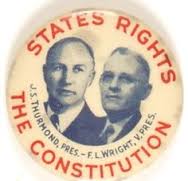 To the Southern supporters of oleo reform, federal civil rights legislation represented another improper intrusion into the private lives of citizens. Jim Crow was the law, and the way of life in the South: if civil rights reform were needed, the States, or even the private citizens themselves, could accomplish what needed to be done. The Democratic Convention split. Led by Strom Thurmond from South Carolina and other segregationists, including Oleo Rivers, the Southern Democrats bolted the party and formed the States’ Rights Party, better known as the Dixiecrats. The new party held its convention in July in Birmingham, Alabama, where the party faithful nominated Strom Thurmond for President and issued a short platform without any mention of oleo but with a strong position against the Democrats’ civil rights program. 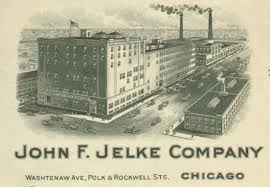 With the Democratic Party split over civil rights, and oleo tax reform linked to the Segregationists, the repeal of the Oleomargarine Act of 1886 withered. The issue was too hot for an election year. Despite faint hope that the oleo tax bill repeal would be addressed by a special session of Congress in late summer, the Senate never voted on the bill. By then, however, Jack Jelke had sold the family business. Earlier in the year, when the oleo reform bill seemed headed for the Senate Floor, Jack Jelke decided that the time was ripe to cash in his family’s hard work. He sold his company to Lever Brothers Company and promptly retired. Reports of the sale price varied, from $16,600,000 to $25,000,000. Lever Brothers was the U.S. subsidiary of Unilever, whose predecessor, Jurgins, had purchased Mège-Mouriés’s original oleo patent in 1871. Unilever was beginning the expansion of its margarine business into a worldwide empire, and the purchase of the Good Luck operation had established a beachhead in North America.

A few months after the sale of The John F. Jelke Company, another oleo heir was born. On October 31, 1948, Lana Jelke Brody gave birth to a son, named after his father. The sale of The John F. Jelke Company to Lever Brothers had been a major news story. The Congressional battles over oleo had been well publicized, and Jelke’s Good Luck Margarine was part of America. The little Dutch girl on the package was a familiar icon to housewives everywhere. Frazier Jelke, despite his well-publicized divorces, was a mainstay of the New York-Newport-Palm Beach society circle. With the Jelke’s family history and societal connections, it was not a surprise that, when Michael James Brody Jr. was born, Walter Winchell added a note in his column: “It’s a boy for the M. Brodys of Wall st. Mom’s the former Lana Jelke of the Social Register.”