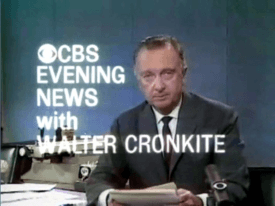 In 1970, before the internet and cable television, before MSN, CNN, cell phones, instant messaging, blogs and twitter, the news cycle was slower, more deliberate. It had its own rhythm. From morning paper to morning paper. From the evening TV news show to the next night’s evening news show. Stories played out from day to day, not minute to minute. Many Americans obtained their news exclusively from the network evening news programs, which typically ran at 6:00 p.m. eastern time. In 1970, CBS’s Evening News with Walter Cronkite was the ratings leader. Cronkite was considered in many polls to be the most trusted man in America. When Cronkite announced that the Vietnam War was unwinnable following the Tet Offensive in 1968, President Johnson supposedly commented, “If I’ve lost Walter Cronkite, I’ve lost Middle America.” Brody had become such a sensation that the CBS Evening News for January 16, a 30-minute program, devoted nearly 3½ minutes to the story. “When man bites dog we’re told it’s news,” Cronkite introduced the segment toward the end of the show, “but it’s nothing to compare with a man who is giving away something for nothing. Hughes Rudd has the story.”

“This may not look like a multi-millionaire,” Rudd said, “but he is.” The story opened with Brody’s playing a few chords from the song he had been working on. “There are starving children in Biafra,” Brody sang. Renée sat behind him. She looked spaced out or stoned. “Behind the folk song and the long hair,” Rudd intoned, “there’s 25 million dollars and it all belongs to Michael Brody, a 21-year-old heir to a margarine fortune and a man determined to spread his money around.” The story included an interview, of sorts, with Brody, strumming his guitar and explaining, in his own disjointed way, why he was giving away the money and why he would gladly die for anyone. He explained that giving away money was the only way to find peace and that he wasn’t giving out money. He was giving out good feeling to mankind. But Brody also promised more. He promised that he would die for anyone who needed help. “If there are any murderers out there. If you want to stab someone in the throat, don’t stab the person you’re stabbing in the throat. Call me and put me in his place. I’ll die for you.” When Rudd asked him if he would give money to someone who wanted to pay off a $12,000 mortgage, Brody replied: “Yes, yes, yes, yes, yes, yes, yes. I will give you money, money, money, money, money.” He hit a C chord on the guitar. “All the money you can ever want.”

“Aren’t you afraid that a lot of people will let you down terribly?” Rudd asked. “Everyone needs someone to bleed on,” Brody said, stealing some lines from “Let it Bleed” by the Rolling Stones. “And you can bleed on me.” The story included interviews with money seekers, one who had heard that Brody was giving out a lot of “bread.” The narration, by Hughes Rudd, added that Brody had offered Rudd “$1,000,000 and a private jet ride to Tahiti. He looked disappointed when I told him I had to work. Hughes Rudd, CBS News, New York.” Cronkite chuckled at the story, then concluded the news program with his signature sign off: “And that’s the way it is, Friday, January 16, 1970.”

A few hours after Cronkite signed off, Brody and Renée went to dinner with a young, African American reporter from WCBS radio in New York. Ed Bradley, who would later star on 60 Minutes, had been assigned to the story. Originally from Philadelphia, he had joined WCBS radio in 1967. In January 1970, he was five months shy of his 29th birthday. He was tall with a bushy beard and an Afro. He wore wire rim glasses. He liked music, especially jazz, and he and Brody got along well. The group went to a Chinese restaurant, which Brody loved, not so much for the food but for the umbrellas that came with the drinks. Bradley and Brody talked Jazz guitarists: Irving Ashby, Django Reinhardt, Les Paul. And the group talked about Brody’s plans, the Vietnam War, the crowds of money seekers. Nestled inconspicuously in the rear of the busy restaurant, Brody felt at peace. A few Singapore Slings and some fried rice later, however, Bradley had to pay for the tab because neither Brody nor Renée had any money. Afterwards, Brody and Renée drove back to their comfortable Scarsdale house. During the ride up the Bronx River Parkway, Brody gushed about the events of the last two days: how he had gone from a nobody drinking beers in the Candlelight Inn, a local dive in Scarsdale, to being a worldwide sensation. He told Renée several times that he could not believe what had happened. What a joke, he said. Money was a joke. The whole world was a joke. Renée agreed. Money could not buy happiness, yet everyone seemed to think it could and so they wanted it. She and her husband knew better. Love was what mattered, not money.

While Brody and Renée drove back to Scarsdale, the line outside Brody’s office at 1650 Broadway grew. Many would spend the night camped out on the sidewalk. Temperatures fell below freezing, but they remained, hoping to get a shot at the oleo fortune. None of them knew that, earlier that day, about the time that Brody imploded at the A & R Recording Studio, Peter Simmons of WNBC in New York called the Scarsdale National Bank and Trust Company to inquire about the $1,000 check Brody had written him the day before. He spoke to J. Henry Neale, the chairman of the board of directors of the bank. Neale was polite but discreet. The bank had been besieged by dozens of persons with checks from Brody. Some had walked in and presented the checks to tellers. Others had called. The President of the Bank, Hubert J. Horan, had been handling most of the inquiries but had grown weary. Neale stepped in to help. It made him think of a Depression Era run on a bank, with one exception. The bank had money. Brody’s account did not.

The amount of monies in Brody’s account was a private matter between the bank and Brody, Neale told Simmons. He could not—would not—disclose any information about the account. Simmons pressed. He wanted to cash the check. He had been briefed by WNBC’s legal department. He had been given all the magic words from the Byzantine world of negotiable instruments: holder in due course, drawer, payable upon demand. Simmons was forceful, and Neale finally said that the bank could not honor the check “at this time.” There were insufficient funds. It would be Monday before additional funds could be transferred into the account.

Other reports also filtered out of Scarsdale. The Reverend J. A. Daines was giving interviews to the press. He and his wife, Rosemary, had driven 60 miles to Scarsdale arriving there early Friday morning. He ran the Helping Hand Rescue Mission in Huntington Station, Long Island. Over the telephone earlier that morning, Brody had promised the mission $50,000 to build cabins at the mission’s summer camp, which catered to disadvantaged children. When the Reverend arrived at 31 Paddington, Brody told him that he didn’t have the $50,000. He then promised them $500,000. While at the house, Daines noticed that Brody was constantly on the phone, making promises to give various amounts of money to the callers but he never wrote down any caller’s name or information. “I knew then that there was something amiss,” Daines told the reporters.