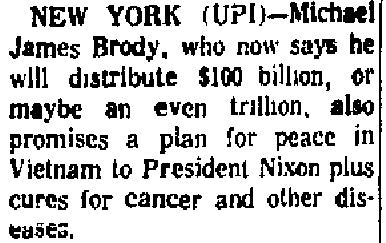 On the Sunday Brody sang on The Ed Sullivan Show, an article appeared in the Berkshire Eagle. It ended with the comment that Brody has “taken many persons with him on this magical trip. Where it’s all going still remains a mystery.” Those along on the magical trip included both the public and the media. In a significant way, the story had been created by the media, yet the media also trailed the story. The magical trip ended that night. Reality caught the myth. “Credulity came to an end,” was how an Australian newspaper put it. When a man announces he has inherited $25 million and plans to give it away, that’s one thing. It is quite another when a man says he is worth a trillion dollars. Questions about Brody’s fortune had emerged even before the Sunday news conference, and by Monday morning, they were front and center. Peter Simmons’ report about the bank’s rejecting his check became news. Other reporters started quoting Simmons in their stories. Sunday morning, Murray Schumach’s front page story in the New York Times included information about the fortune that indicated Brody’s estimation was off base. The Monday morning papers were full of questions. The New York Post’s banner headline put it simply, “BRODY’S MILLIONS—MORE QUESTIONS.” 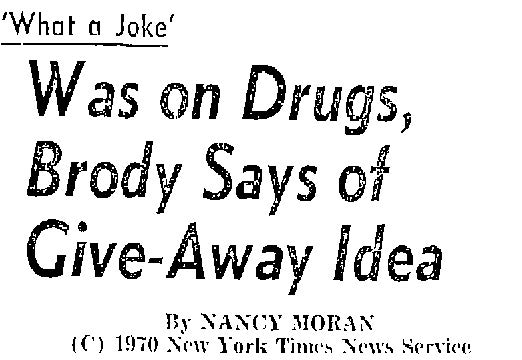 Moran’s article about Brody’s weekend jaunt to Puerto Rico appeared below the fold on page one of the Monday edition of the New York Times. Its title: “Brody Says Drugs Inspired Giveaway.” She recounted the wild, drug-filled events of the last two days, including the flight to San Juan, the short stay at the Vanderbilt, the flight back and The Ed Sullivan Show. The article also raised questions about the size of Brody’s inheritance. A banker from the Continental Illinois National Bank & Trust Company in Chicago, which administered Brody’s trust, would not reveal Brody’s share of the inheritance but, on behalf of the bank, had issued a formal statement that Brody’s original claim that he had inherited $25,000,000 was grossly exaggerated.

Later Monday morning, the Scarsdale National Bank and Trust, which held Brody’s checking account, withdrew the open line of credit Brody had been given based on stocks and bonds posted as collateral. The chairman of the bank, J. Henry Neale, explained to the press that the action was done for Brody’s own protection. And the manager of 1650 Broadway posted a sign on the glass door: “Mr. Brody’s new address is 105 E. 106th Street.” Dozens of people were still waiting for Brody, many poorly dressed against the cold. “Why isn’t he here?” several asked. “Why did he go away?” An off-duty police officer hired by the building manager for crowd control told the fortune seekers not to go to the East 106th address. “Don’t get your hopes up,” he said. “That’s only a place where he gets his mail.” You’re better off if you write him a letter. Within a few hours, more than 60 persons had lined up outside 105 E. 106th Street in Harlem. There were rumors that Brody had purchased the building. The occupants of that address—the Pathe Building, once the home to an NBC recording studio—said they had never heard of Brody. 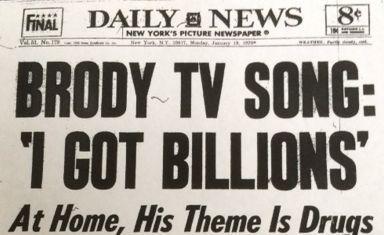 Brody’s news conference at JFK International Airport later that day lasted 20 minutes. The newspapers would later describe it “rambling,” “ranting,” and “filled with contradictory statements.” The news reporters had many questions about Brody’s fortune and the drugs he had taken. Few asked questions about his Vietnam Peace proposal. The story had changed, and the press had new angles. The story was no longer about a philanthropic hippie millionaire who wanted peace, love and the end to suffering. The press was no longer willing to ignore Brody’s ramblings. Now, the fact that he rambled and the suspected reasons why he rambled became the story, a story about drugs or fraud or both.

Brody dismissed the questions about the size of his inheritance. It’s just paper, he said. Paper. Who needs paper? Love and peace were more important. The reporters were wrong. The checks were forgeries. It was a plot. And, besides, Brody said, millionaires had been sending donations for him to administer and dole out. And he had signed a recording contract worth at least a $100 million. Movie studios were after him. There would be money rolling in soon. He claimed he had purchased the New York Stock Exchange. He said that he had written only seven checks, for $48,000, but he was also suspending his giveaway plans. The people were too greedy, and he needed to focus on more important issues: the famine in Haiti and the War in Vietnam.

Brody again claimed to have saved the people of Haiti by dropping one-dollar bills, a million of them, from a helicopter, and he admitted that he “might be the biggest con man ever to hit this world.” But he did not deny his drug use. “I must have taken 300 or 400 acid trips,” Brody said. He paused and thought. “I have taken 5 million acid trips.” The reporters did not laugh. “I’ve taken it on long distance trips. It’s beautiful. People should openly know the truth about LSD. The government has put out a lot of bull about drugs. Drugs help me feel the pain of life and the beauty. It shook up my brain.” There was not a lot of debate among the reporters about the last statement. “I’m a big joke but I want you people to take me seriously. I’m trying to show the world how stupid it is.”

“Maybe President Nixon should try drugs,” Brody added when he was asked about his own drug usage. “I want to be very honest with the whole world. Once I end the war in Vietnam, people won’t care if I took LSD once in my life.” He then turned to his peace plan. The BBC had conveyed the offer to the North Vietnam government. The war was over. The North Vietnamese would begin withdrawing from the south immediately. He had planes ready to ferry the troops home. He hugged Renée and said they were off to Washington, D.C. to tell Nixon that the war was over. Then, in what the New York Daily News later described as a “remarkable non sequitur,” Brody accused Nixon of holding up the end of the war. “I’m not going to let him get away with it for one minute.”